Gruescript is a tool for creating point-and-click text adventures which feel like classic 'puzzlebox' games while eliminating the need for the player to type, making the games friendly to modern devices and players.  You build your game online and download it as a playable HTML page, which you can host on your own itch.io site or elsewhere.

If you prefer to develop offline, download "gruescript-beta.zip" below. This contains a copy of Gruescript for offline use (it's exactly the same as the online version), as well as a syntax highlighting file for Notepad++.

Gruescript is currently in beta. Please report bugs to robindouglasjohnson@gmail.com, with details of what happened, what you were doing, and what browser you were using, or post in the comments here, or raise an issue on github below. Thanks!

Gruescript is released under the open-source MIT License. There's a public repo at https://github.com/robindouglasjohnson/gruescript (issues and pull requests are welcome.) Share and Enjoy!

I still love Grue, hopefully you can find the time again someday for updating. :)

Really nice work, I hope you will find the time and energy to build on it. But imho, it should bring u a dollar instead of free for all (when they want), just to give you a point to still work on it.

Thanks! I choose to make it free, IF has always been an open culture and I wouldn't have been able to make any of my own games without free software by other people so it's nice to give something back

Maybe i found some errors in the manual. Where to report this?

Hi Robin, I'm in the process of translating Coat of Darkness to French (and also make a French commented little game template. I'll let you know when it's done) and I was wondering if you plan to support images in a near future. It would be great to be able to display a location image, NPC's portrait and why not images for objects in locations. Amazing work so far.  (BTW, I'm the Laurent Gontier you credit upper in this page)

In the built-in Party Line game, the first clickable command result has a typo:

prompt knock on $this

prompt knock on {$this}

otherwise it prints "$this" into the transcript. Only pointing out the nitpick because the example is supposed to teach the syntax.

I put one of your sample games up on Observable to test out the export. It works great! ( Except save game which depends on prompt() but that's easily fixable )

Ah, interesting! I actually rewrote the save/restore interface without prompt() for Gruesome (which, despite being a parser game, uses much of the same engine), so I'll try to make that change to GS soon.

Thanks! Google Chrome folks are out to get things like alert and prompt deprecated. I don't think they should but it's good to not depend on those methods for the engine.

The latest version gets rid of the prompts and uses nice slidey modals instead.

This is amazing! Since it's open source does that mean you might accept pull requests? As a webdev passionate about IF it'd be great to contribute if possible?

yes, pull requests are welcome! Somebody already spotted and fixed a mistake in the build log.

Awesome! I'll take a look and see how I might help in some way.

I’ve only played with it a little bit but I really love it so far.

Looks like a great engine! Pity it doesn't support non-Basic Latin names for rooms and verbs...

It's just the internal names that have to be basic letters, numbers and underscores, if that's what you mean. You can set the display names to anything you like:

Looks like what I was looking for, thank you!

Exciting! Thanks for providing, I'll have to check this out...

A brilliant idea. I hope this takes off, and will use it if I find the time. 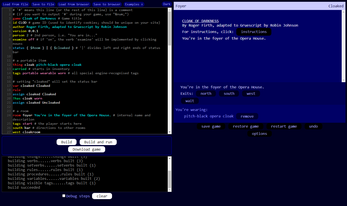 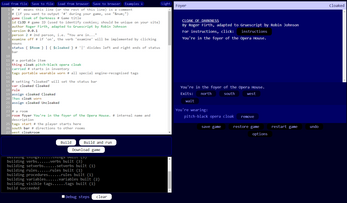 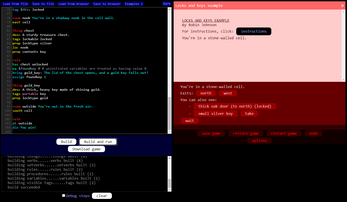